The Museum of Contemporary Art San Diego (MCASD) is looking for sites, building walls, in the downtown San Diego to be used by artists for its exhibition Viva la Revolución: A Dialogue with the Urban Landscape [Obeygiant.com, 2010]. MCASD will organise "a multifaceted exhibition that explores the dialogue between artists and the urban landscape" at its galleries as well as urban sites, as it claims the majority of the world's population lives in urban areas for the first time in history and "the urban setting and its corresponding lifestyle are major sources of inspiration in contemporary culture" [MCASD, 2010].

"This is an historic revolution in visual culture, in which the codes and icons of the everyday—found on the streets in graffiti, signage, waste, tattoos, advertising, and graphic design—have been appropriated and used as an integral part of contemporary art-making. The urban landscape inspires and serves as both a platform for innovation and a vehicle for expression for many artists. The city itself, its buildings, vehicles, people, and advertisements, are not only the surface where the art is applied. The city fuels the practice." [MCASD, 2010] 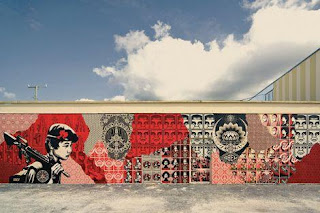